Christmas 'round these parts was pretty sweet. We had an exceptional Christmas eve dinner with Dave's parents. Christmas morning was cozy. Me and Dave woke up in our Christmas present to each other: a new bedframe (it's so cozy-looking, I'll post a picture when I find my camera) which somehow makes our humble traded mattresses feel like a whole different experience and definitely brightens up our room. Maddie woke up to find a tent, teepee, and tunnel playset (she opened most of her other gifts at grandma and grandpa's the night before). Late Christmas morning we were found opening a few more gifts at my mom and dad's house, and then feasting on my dad's famous pancake, bacon, eggs-made-to-order, and ham breakfast. My contribution was fruit and yogurt parfaits with whipped cream. That night we had a bit of a Christmas variety show. Me and Laura sang, Cooper led us in the game "going on a bear hunt" My dad read a poem, and Maddie and Elyza sang "once there was a snowman". From there all the family chilled, popping in to my parent's house now and again to play games and help eat their Christmas goodies.

I can't beleive Christmas break is almost over! I'm just glad I survived last semester. I feel like such a wimp speaking in terms of survival when I was only taking three classes. Next semester should be less hectic, I'll only be taking one class, Computer Design, which is the pre-req to computer illustration.

We're going up to Zion's for a picnic tomorrow, and Dave got some sponsor passes to First Night since SkyWest sponsors it, so we'll be headed out to that tomorrow night.

BTW, I lost my camera, so the I only have one Christmassy picture to post from before it got lost (sorry Spencer!) Hope everyone had a good Christmas, have a happy New year!

I apologize for the lack of updating. I'll do my best with this post. I've had a rather embarassing accident involving me trying to roll-start my car, and my finger getting smashed between the open car door and the stucco entry-way of the garage. It hard for me to type. BUT the cool thing is that my cast resembles a gun in dim lighting. Also, being an invalid gives me a bit of extra time to do stuff like post on our blog!

Man, I have got to work on my mean face.

Dave has been working at SkyWest. Last year he transferred from his position at the airport down to the corporate offices to work in the graphics department and has been enjoying his job. I've finally started taking classes at DSC again. Our deal was that I'd go back to school when Dave was finished, but since it's been a few years since we made that deal and he now has the same amount of classes left as he did back then, we decided I'd go back and we'd finish together. Maddie, School, and the occasional shift cover at Great Harvest have been keeping me pretty busy. School has been stressing me out, but I try to remind myself how much I ached to be in school last year and that gives me the perspective I need to keep at it.

Maddie continues to be a tremendous cutie pie. She's still a chatter-box, but she now says a good amount of real words along with the incomprehensible ones. She will often pretend to be Kiki (the young witch from one of her favorite movies) while pretending to mount a broomstick, or walk around the house in my heels and proclaim "I'n Mommee!".

We bought a generically cute fairy costume for her to wear on Halloween but she refused to let us put it on her for cubicle trick-or-treating at Dave's office. Instead she carried the frilly thing around with her fairy wand and treat bag, wearing only green tights and a shirt.

Later in the evening we bribed her with candy and she let us put it on her so we could trick-or-treat the most festive house in the neighborhood.

Maddie and her cousin Elyza palled around in various displays of cuteness for most of the evening.

I totally made a video collage of maddie. So this blog would be the online equivalent of my refridgerator door.

Dave has abandoned his post as fambly blogger, so I, Annie, have nobly taken over. "Whatever. Say I was discouraged. I haven't abondoned it." he says as she cruelly transcibes every word onto the screen. MWAHAHA!

So anyway, I'm sort of taking over for the time being. There's really nothing much new. I still work at Great Harvest, Dave still works at SkyWest, Maddie's vocabulary is still made up mostly of the words "Uh-Ooooh" and Ooo-Weeee". BUT we do have a new family picture. 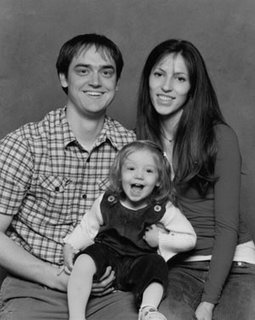 Enjoy this one. You can't tell by our happy smiling faces, but the few moments preceding the split second in which the picture was snapped were a trying few. Maddie wasn't in much of a mood to sit still and have her picture snapped, which in turn put her mom and dad in a similar mood. In the end it was Dave's quick thinking, and unnaturally strong (I'm talking popeye here) arms that saved us all. He tossed Maddie up in the air a couple times just before the camera lady snapped the picture. This practice succeeded in extracting a cooperatively happy face from everyone involved.
Posted by The Berry Family at 1/10/2006 08:12:00 PM 2 comments:

The Berry Family
Dave, Annie, and Maddie. Our family as we know it.