Snow three days in a row--ROCK No work today because of it even, and school was cancelled. I drove to my mommies house to visit the twins and jump on their beds and yell "snowday!" but they were already out playing in it. Go figure.

There hasn't been much happening around here besides hustle and bustle (mostly bustle) for the holidays and hiking and web-developing (that one's dave's) however I did make a thing for the wall. 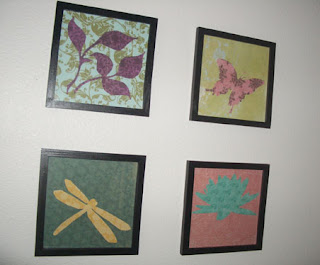 I call it "rippy bits"! No actually I don't because it's cut not ripped, but I am shameless when it comes to spongebob squarepants references.

We went to an Aquabats concert at the electric theater recently. It wasn't quite as fun as the one we went to in salt lake when then had concertgoers racing inflatable rafts crowd-surf style across the venue and back, but it was still fun. We dressed up in obscenely colorful tracksuits in honor of Ricky Fitness once again.

I went hiking with Maddie, Amanda, and Sara last Saturday to Camelback out by Gunlock. It was too cold for any froggies to be out, but the weather was beautiful. Perfect for shadow pictures and running around in the vortex.

you could have jumped in my bed! :)

if you wanted more driving to jumping ratio, you could have jumped on mine.

The Berry Family
Dave, Annie, and Maddie. Our family as we know it.